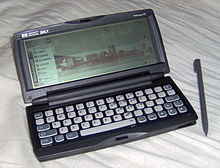 Picture by Kajac123 – Own work

In 1996, Microsoft released Windows CE, a version of the operating system meant for personal digital assistants and other tiny computers.

Following Bill Gates’ internal “Internet Tidal Wave memo” on May 26, 1995, Microsoft began to redefine its offerings and expand its product line into computer networking and the World Wide Web. With a few exceptions of new companies, like Netscape, Microsoft was the only major and established company that acted fast enough to be a part of the World Wide Web practically from the start. Other companies like Borland, WordPerfect, Novell, IBM and Lotus, being much slower to adapt to the new situation, would give Microsoft a market dominance. The company released Windows 95 on August 24, 1995, featuring pre-emptive multitasking, a completely new user interface with a novel start button, and 32-bit compatibility; similar to NT, it provided the Win32 API.

Windows 95 came bundled with the online service MSN, which was at first intended to be a competitor to the Internet, and (for OEMs) Internet Explorer, a Web browser. Internet Explorer was not bundled with the retail Windows 95 boxes, because the boxes were printed before the team finished the Web browser, and instead was included in the Windows 95 Plus! pack. Backed by a high-profile marketing campaign and what The New York Times called “the splashiest, most frenzied, most expensive introduction of a computer product in the industry’s history,”

Windows 95 quickly became a success. Branching out into new markets in 1996, Microsoft and General Electric’s NBC unit created a new 24/7 cable news channel, MSNBC. Microsoft created Windows CE 1.0, a new OS designed for devices with low memory and other constraints, such as personal digital assistants. In October 1997, the Justice Department filed a motion in the Federal District Court, stating that Microsoft violated an agreement signed in 1994 and asked the court to stop the bundling of Internet Explorer with Windows.

Microsoft released the first instalment in the Xbox series of consoles in 2001. The Xbox, graphically powerful compared to its rivals, featured a standard PC’s 733 MHz Intel Pentium III processor.

On January 13, 2000, Bill Gates handed over the CEO position to Steve Ballmer, an old college friend of Gates and employee of the company since 1980, while creating a new position for himself as Chief Software Architect. Various companies including Microsoft formed the Trusted Computing Platform Alliance in October 1999 to (among other things) increase security and protect intellectual property through identifying changes in hardware and software. Critics decried the alliance as a way to enforce indiscriminate restrictions over how consumers use software, and over how computers behave, and as a form of digital rights management: for example the scenario where a computer is not only secured for its owner, but also secured against its owner as well. On April 3, 2000, a judgment was handed down in the case of United States v. Microsoft Corp., calling the company an “abusive monopoly.” Microsoft later settled with the U.S. Department of Justice in 2004. On October 25, 2001, Microsoft released Windows XP, unifying the mainstream and NT lines of OS under the NT codebase.

The company released the Xbox later that year, entering the video game console market dominated by Sony and Nintendo. In March 2004 the European Union brought antitrust legal action against the company, citing it abused its dominance with the Windows OS, resulting in a judgment of €497 million ($613 million) and requiring Microsoft to produce new versions of Windows XP without Windows Media Player: Windows XP Home Edition N and Windows XP Professional N.