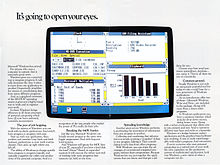 Windows 1.0 was released on November 20, 1985 as the first version of the Microsoft Windows line

Microsoft released Microsoft Windows on November 20, 1985, as a graphical extension for MS-DOS, despite having begun jointly developing OS/2 with IBM the previous August. Microsoft moved its headquarters from Bellevue to Redmond, Washington on February 26, 1986, and went public on March 13, with the resulting rise in stock making an estimated four billionaires and 12,000 millionaires from Microsoft employees. Microsoft released its version of OS/2 to original equipment manufacturers (OEMs) on April 2, 1987. In 1990, the Federal Trade Commission examined Microsoft for possible collusion due to the partnership with IBM, marking the beginning of more than a decade of legal clashes with the government. Meanwhile, the company was at work on Microsoft Windows NT, which was heavily based on their copy of the OS/2 code. It shipped on July 21, 1993, with a new modular kernel and the 32-bit Win32 application programming interface (API), making it easier to port from 16-bit (MS-DOS-based) Windows. Microsoft informed IBM of Windows NT, and the OS/2 partnership deteriorated.

In 1990, Microsoft introduced the Microsoft Office suite which bundled separate applications such as Microsoft Word and Microsoft Excel. On May 22, Microsoft launched Windows 3.0, featuring streamlined user interface graphics and improved protected mode capability for the Intel 386 processor, and both Office and Windows became dominant in their respective areas.

On July 27, 1994, the Department of Justice’s Antitrust Division filed a competitive impact statement which said: “Beginning in 1988, and continuing until July 15, 1994, Microsoft induced many OEMs to execute anti-competitive ‘per processor’ licenses. Under a per-processor license, an OEM pays Microsoft a royalty for each computer it sells containing a particular microprocessor, whether the OEM sells the computer with a Microsoft operating system or a non-Microsoft operating system. In effect, the royalty payment to Microsoft when no Microsoft product is being used acts as a penalty, or tax, on the OEM’s use of a competing PC operating system. Since 1988, Microsoft’s use of per processor licenses has increased.”